What has not been done, but is known and will be fixed: (in detail)

So far, the sounds are on the girl only when the machines are running.
On the release version, each animation of the girl will be voiced individually.
The rest of the sounds of the game will begin to appear in the next versions. 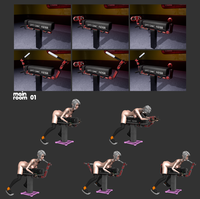