Crisis Point: Extinction is a lewd platformer Metroidvania game in which you play as headstrong military soldier Alicia as she explores a mysterious alien planet.

Set in the not-too-distant future, mankind has finally discovered the secrets to long-distance space travel and, in their haste to explore the stars, are infected with a virus that alters the Y chromosome in developing infants, causing all children to be born female.

As Alicia, you must outwit, outshoot, and outlast the various creatures lurking on and below the planet’s surface as she locates survivors and explores deep caves, ancient ruins, alien jungles, and more, all while searching for a cure to save humanity.​

-Added 5 more unique Edovex H-scenes (bringing the total from 1 to 6)
-Added optional xray animations to every applicable H-scene (except slimes; will come later)
-Implemented new Ledge Vault ability for the Kilogrip, to improve gameplay flow
-Implemented new Slam ability for the Weighted Boots, to improve underwater mobility and give a fun new movement and combat option in general
-Implemented Azulisk (Crystal Dragon) CG
-Finished implementing dialogue choice system, and wrote optional hints for all points of the playthrough, which the player can access by speaking to Rodriguez back at camp
-Fixed more bugs and glitches

More was planned for this update, but as you all know, I’ve been going through a major mental health crisis this year. I’m finally getting to a healthy place again, slowly but surely, and next year is looking up for not just myself, but everyone in the Crisis Point team.

I’ve said it before, but despite the long wait for v0.45, this update isn’t any larger than any previous update has been. I wasn’t working for a large portion of the year thanks to my mental health issues leaving me barely able to get out of bed some days, but I felt the need to get v0.45 out and finished, even if the size of it is disappointing to some people. Honestly, after all this time there’s no possible way I could make an update big enough to make up for the long wait, so I’ve just been crunching hard the past week to get what I could out of the door, so the team can start 2022 fresh and without the weight of 8 months of expectations keeping us down. Speaking of starting fresh, let’s look forward to v0.46, shall we? 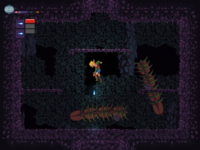 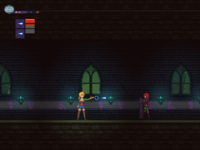